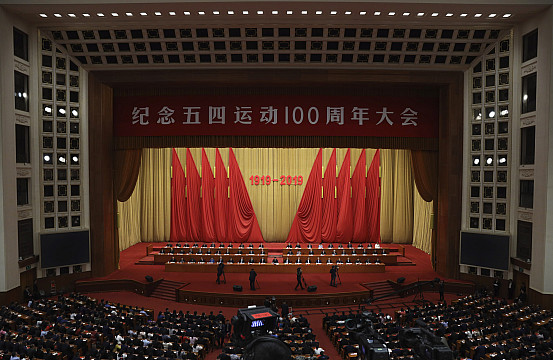 This Saturday marks the 100th anniversary of China’s May Fourth Movement —  an anti-imperialist cultural and political movement that grew out of mass student protests in Beijing on May 4, 1919. The Chinese Communist Party has always highly regarded the May Fourth Movement, because it laid the roots for the founding the CCP two years later. Mao Zedong himself claimed that China’s proletariat class grew into the main power within China’s revolution after the movement. As of 1949 — the year the CCP defeated the Kuomintang and founded the People’s Republic of China — every May 4 was also designated as China’s Youth Day.

On April 30, the CCP held a high-level ceremony to commemorate the 100th anniversary in Beijing. Xinhua reported that more than 3,000 officials from the Party, the military, and the government, as well as youth delegates, gathered at the Great Hall of the People. Slogans like “Closely unite around the Party Central Committee with Comrade Xi Jinping as the core” hung high in the hall. After the mass grouping sang a series of songs including “I and my country,” “Without the Communist Party, there would be no new China,” and “Glorious, the Chinese Communist Youth League,” Xi Jinping, Chinese president, general secretary of the CCP Central Committee, and chairman of the Central Military Commission — as Xinhua carefully noted — made a formal address.

In his long speech, Xi repeatedly urged China’s youth to love the country, follow the CCP, and be grateful to the CCP. While the original May Fourth Movement grew out of popular discontent with the then-government of China, the CCP has reframed it as a mass outpouring of patriotism — a formula the CCP is much more comfortable with, as it consistently equates the love of China with love of the Party.

For every Chinese, patriotism is their duty and responsibility. It is where their heart belongs. For China’s youth in the new era, to love their motherland is their foundation for life and success. In today’s China, the essence of patriotism is to maintain a high degree of unity in loving the country, the Party and socialism.

In the new era, China’s youth must listen to the Party, follow the Party, care for the country and people, devote themselves, and strive for patriotism.

In the conclusion of his speech, Xi also urged all Party, government, and military organs, social groups, and grassroots organizations in rural and suburban areas to “care for” and “support” the youth.

Notably, it’s not the first time that Xi has emphasized the importance of China’s youth following the Party in recent days.

On April 19, the Political Bureau of the CCP Central Committee (the top 24 people who oversee the CCP together with Xi) held a special learning session centered around the exact same topic.

At the learning session, Xi told the Politburo that the Party should “guide the vast number of young people to consciously uphold the Party’s leadership, listen to the Party, and follow the Party.”

The latest ceremony is obviously a follow-up step after the Politburo decision. It can be expected that a new round of efforts aimed at “guiding the youth” will sweep the whole country very soon.