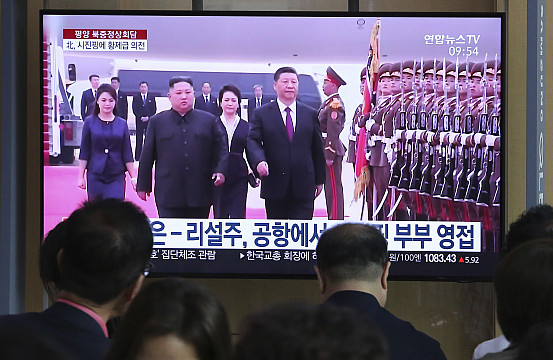 Chinese President Xi Jinping wrapped up what his Foreign Ministry called a “very friendly and successful visit” to North Korea on Friday. The two-day visit, from June 20 to 21, was Xi’s first to North Korea since assuming office in 2013, and the first by any Chinese president since 2005. Notably, Xi’s North Korea trip followed four visits to China by North Korean leader Kim Jong Un.

Predictably, Xi’s first trip to Pyongyang was all pomp and circumstance. He and his wife enjoyed a lavish welcome, including not only the standard 21-gun salute but – according to Kim – a quarter of a million North Koreans lining the streets to welcome the Chinese leader. Xi and Kim also attended a special mass performance to celebrate the visit, featuring Chinese songs and folk dances along with gymnasts and other performers.

Song Tao, the head of the Chinese Communist Party Central Committee’s International Department, said that the performance and other activities “fully reflected a deep and profound friendship of the party, government and people of the DPRK towards the party, government and people of China,” according to Xinhua, China’s state-run news agency. (DPRK refers to the formal name of North Korea, the Democratic People’s Republic of Korea.)

Also according to Song, Xi and Kim reached “extensive major consensus” on the China-North Korea relationship, drawing a “blueprint for the future of bilateral ties.” But what, precisely that blueprint was – other than repeated rhetorical references to continuing China-North Korea friendship – was left to the imagination.

Xi himself, in remarks quoted by Xinhua, expressed hope that “both sides can work together to implement the various agreements [reached] during the visit this time,” without explaining what, exactly, those agreements were. The promise to “step up high-level exchanges and strategic communication” was both vague and a repetition of previous commitments made at the first Xi-Kim summit.

Indeed, unlike Xi’s normal visits abroad, there was no flurry of business deals or signing of memoranda of understanding to accompany his North Korea trip. Xi paid some lip service to supporting Kim’s “new strategic line of economic development,” but China didn’t back up that support with new investment projects or trade deals.

That’s not surprising, given that UN Security Council sanctions on North Korea remain tight; any public business deals would risk catching China out as a sanctions violator. But there may also be genuine reluctance on the Chinese side to pour money into North Korea, given the slow progress of previously agreed-upon projects like the Special Economic Zones along the Sino-North Korean border. The surprise execution of Jang Song-thaek, Kim’s uncle and previously China’s main partner for economic cooperation with Pyongyang has taken its toll.

With no public announcements on deals or agreements, the only concrete takeaway was that Xi and Kim both reaffirmed their commitment to a political solution to longstanding issues on the Korean Peninsula. After a flurry of diplomacy in 2018 and early 2019, including three meetings between Kim and South Korean President Moon Jae-in and two summits between Kim and U.S. President Donald Trump, talks have stalled. The second Trump-Kim summit in Hanoi in late February ended abruptly, without any agreement, as the two sides proved unable to overcome differences over the pace and scope of sanctions relief and what North Korea would need to give up in return.

Speaking alongside Kim, Xi pointed out that the “international community hopes that talks between the DPRK and the United States will move forward and bear fruit.” He also expressed his appreciation for Kim’s efforts in that regard and promised further assistance from China “to address [Pyongyang’s] legitimate security and development concerns.”

Meanwhile, Kim put the blame for the breakdown squarely on Washington, telling Xi that North Korea “has taken many active measures to avoid tensions and control the situation on the Korean Peninsula, but has not received positive responses from the party concerned.”

Nothing in Xi or Kim’s remarks was new. Similar statements have been made repeatedly over the past year, both by the top leaders themselves and by Chinese and North Korean officials. However, simply by standing alongside Kim, Xi gave the distinct impression he agrees with the North Korean assessment of the current diplomatic standoff.

That symbolism, of course, was the entire point. As Song put it in China’s post-trip readout, the visit served both as “huge political support and encouragement for the party, government and people of the DPRK” and as a message to the rest of the world about “the unbreakable China-DPRK friendship.” Xi and Kim’s wreath-laying ceremony at a memorial to Chinese soldiers killed during the Korean War was an especially poignant symbol of their alliance. That message will prove important as Xi prepares for a meeting with Trump next week on the sidelines of the G-20 in Japan.