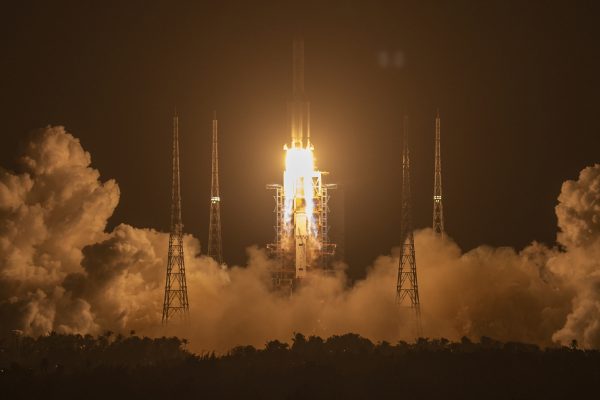 On April 29, China launched the first piece of its space station’s core module, Tianhe (heavenly harmony), on its Long March 5B rocket from the Wenchang Spacecraft Launch Site in south China’s Hainan Province. This is the first of 11 such launches planned, to complete construction of China’s permanent space station by end of 2022.

This year, there will be four more launches for construction of China’s space station. The next one is scheduled for May with the launch of the Tianzhou 2 cargo space craft once the Tianhe core module is in place, followed by the launch of three astronauts to study life support systems during a stay of three months in low Earth orbit (LEO). This will be followed by the launch of the Tianzhou 3 cargo spacecraft and the Shenzou 13 spacecraft later this year, with three astronauts who will stay six months in LEO – by far the longest stay in space by Chinese astronauts. Space station construction will be complete by the end of 2022 with six other launches scheduled that year.

Tianhe will act as the management and control hub of the space station Tiangong, meaning Heavenly Palace, with a node that could dock with up to three spacecraft at a time for short stays, or two for long… We will learn how to assemble, operate and maintain large spacecraft in orbit, and we aim to build Tiangong into a state-level space lab supporting the long stay of astronauts and large-scale scientific, technological and application experiments… The station is also expected to contribute to the peaceful development and utilization of space resources [emphasis added] through international cooperation, as well as to enrich technologies and experience for China’s future explorations into deeper space.

Some of those deeper space probes include the construction of a research base on the moon by 2036 in collaboration with Russia and other international partnerships (in direct competition with the United States’ Artemis lunar program), the construction of Space Based Solar Power Satellites (SBSP) in orbit that will help power China’s space activities, and missions to Mars, including sample return and a survey of the red planet. China entered Mars’ orbit successfully for the very first time in February this year and will attempt its first landing on Mars’ surface, sending out a rover next month.

Why a Permanent Space Station?

China’s establishment of a permanent space station has been in planning for decades. It was in 1992 that Project 921 was approved to develop China’s human spaceflight program. While one of the rationales that influenced China’s decision to establish its own space station was that it was denied participation in the U.S. led International Space Station (ISS), that is not the only core reason. For China, acquiring space command and control that leads to better access to space has been its goal since 1992. For space access to be achieved, establishing a permanent presence in LEO and above, to include cislunar space, has been identified as a core objective.

This led to the establishment of projects supporting China’s permanent space station and its lunar program: in-orbit assembly and maintenance, experiments with its temporary space labs (the Tiangong 1 and the Tiangong 2), the autonomous docking of the Tianzhou 1 for cargo supply with the Tiangong 2, and testing the sustainability of human presence in LEO. Li Ming, senior vice president of CAST, specified that China’s ambitions include harnessing of space resources from the moon, space-based solar power, and in situ resource utilization and manufacturing. Construction of the permanent space station is the first step toward achieving those goals. Li’s perspective was supported by Lt. General Zhang Yulin of the PLA Strategic Support Force, who stated that China will be developing space technology to exploit the earth-moon space to harness solar energy once its space station is built.

With its space station in place, China will be able to conduct experiments and test technologies like 3D printing, the effect of long-term human presence in space, shielding against radiation, and human adaptability to the space environment.

Second, it could drive partnership with Russia, which is already expressing discontent with the ISS. Russian officials have warned that ISS technologies are dated and that Russia may decide by 2025 not to participate in the initiative. Similar to the China-Russia Memorandum of Understanding (MoU) on the lunar research base, China and Russia could partner in China’s space station. Critically, Russia and India just established a 2+2 ministerial dialogue between their foreign and defense ministries with space cooperation as one key area. The implications of that for China-India-Russia future space cooperation will be an interesting area of strategic focus. Meanwhile, both Russia and India have expressed plans for their own space stations.

Third, China’s permanent space station signals to the world that China is openly contesting the United States for space leadership across the board, and that it is a capable partner for international cooperation in space. Once China completes its permanent space station, the prestige of being viewed as an equal to the U.S. and the ISS partners, as a capable spacepower, has strategic implications to its current and potential partners for the Belt and Road Initiative Space Information Corridor. It will also help establishing China’s overall geopolitical power and influence in instituting global norms on space behavior.

Fourth, space capacity is a surrogate indicator of military power: The ability to do something technically difficult in space signals clearly that China could do other technically challenging things. Given space’s contribution to military capacity, China’s space prowess has important implications for military fields such as space situational awareness (SSA), reconnaissance, navigation and intelligence, as well as space warfare capacities. This sends a signal to others to look out for Chinese technical might and could serve to deter challenges to China’s interests.

Fifth, from a technological perspective, a permanent space station also equips China with practical spacefaring benefits, enabling China to develop technology for long-term habitation required for crewed moon and Mars missions, toward their eventual goals of permanent settlement. Moreover, the Chinese space station’s lower inclination than the ISS (41-43 degrees vs. 51.6 degrees) makes it better positioned for logistical support for its planned 2036 lunar base.

China aims to become the lead space nation by 2045 and is following a long-term strategy of space capacity development and technology demonstration to that end. The launch of the core module for China’s permanent space station is the first step toward permanent space presence and it ticks off one of its requirements for comprehensive space power and global legitimacy.