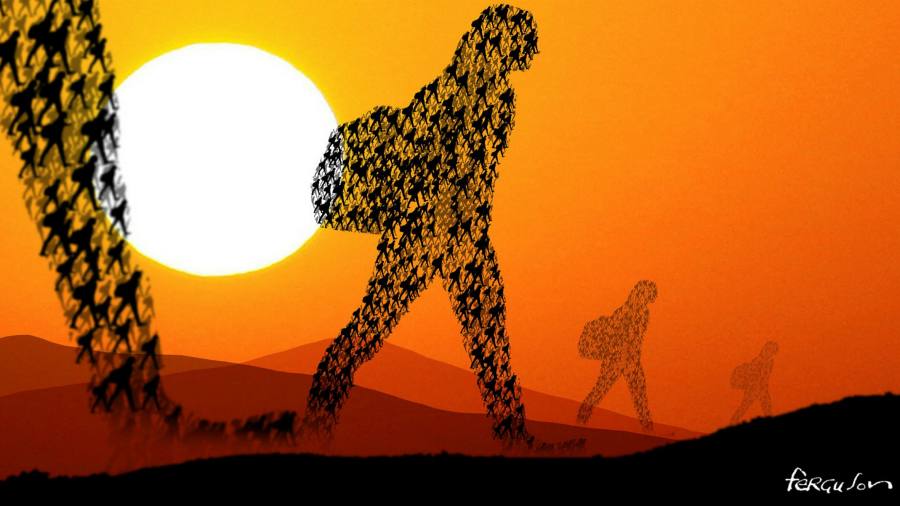 “China will grow old, before it grows rich” is one of those things people like to say at conferences — usually followed by a dramatic pause. The implication is that China’s rise to global dominance will soon hit a giant barrier: demographics.

China’s low fertility rate means that its population will shrink and age over the coming decades. Last week the FT reported that China’s population has already begun to fall — a few years earlier than the UN had predicted.

A large, expanding and youthful population has driven the rise of nations for much of human history. Great powers needed warm bodies to put on a battlefield and citizens to tax. Napoleon’s conquests were preceded by a population boom in France in the 18th century. By the 20th century, France’s population had fallen behind Germany and Britain; a source of justified anxiety for the French elite.

But a shrinking and ageing population may not have the same gloomy implications in the 21st century. The great-power struggles of the future are unlikely to be decided by vast land battles. In the recent war between Azerbaijan and Armenia, unmanned drones played the critical role on the battlefield. Britain’s recent strategic review cut the army, while investing heavily in technology.

If technological prowess, rather than hordes of young men, is the key to future power then China is well placed. The country has cutting-edge capabilities in fields such as robotics and artificial intelligence. With a population of 1.4bn people — which is likely only to decline gently until mid-century — China will not be short of manpower either.

It is the structure rather than the size of China’s population that will be the real challenge. By 2040, around 30 per cent of the country will be over 60. More old people will have to be supported by a smaller working age population, slowing economic growth.

China may never achieve the per-capita wealth levels of the US. But even if the average Chinese is only half as rich as the average American, the Chinese economy would still easily surpass America’s in overall size.

China will soon lose its title as the world’s most populous nation. The populations of India and China are roughly equivalent. But by the end of the century, UN projections suggest that the India’s population will be 1.5bn, compared with 1bn people in China. (Some other academic studies put China’s population in 2100 below 800m).

But the Indian economy is just a fifth the size of China’s. So the wealth and power gap between the two countries will not close quickly.

China’s population slump was hastened by its one-child policy, abandoned in 2015. But Chinese demographic trends are fairly typical for east Asia. The Japanese population peaked at 128.5m in 2010 and is now falling. The UN projects Japan’s population to be just 75m by the end of the century. The trends in South Korea are similar.

The shrinking and ageing of populations is also taking place in parts of Europe. Italy’s population has already begun to fall. Even the US is slowing down. The latest census shows that America’s population is now 331.5m — but growing at its slowest rate since the 1930s. Demographers speculate that America, like Europe and east Asia, may soon be grappling with the problems of an ageing population.

Overall, the world’s population is expected to keep growing from 7.8bn today to roughly 11bn by 2100 — with most of the growth in Africa and south Asia. The population of Africa alone is set to double between now and 2050.

By sheer weight of numbers, countries such as Nigeria and Pakistan, will gain global influence. But they are also likely to remain relatively poor and politically unstable — with climate change worsening the prospects for much of sub-Saharan Africa. Some of the fastest population growth is taking place in already failing states such as the Democratic Republic of Congo and Niger.

Demography will continue to shape world politics, as it always has. But the historic connection between a growing and youthful population and increasing national power is giving way to something more complex. The most significant division may now be between rich and middle-income countries — where populations are static or falling — and poorer countries, where populations are expanding fast.

Left unchecked, the natural corrective tendency would be mass migration from the Global South to Europe, North America and east Asia. But east Asians are currently much less open to immigration than the west. Even though Japan’s population could almost halve by 2100, the Japanese are clinging to social homogeneity in preference to mass migration. China, which has a very ethnically-based view of citizenship, will probably make similar choices.

By contrast — despite the current political rows about immigration in the US and the EU — the west is likely to remain comparatively open to migrants. Western societies will gain economic dynamism as a result. But they could also lose political stability — since the backlash against immigration has helped to drive the rise of politicians such as Donald Trump.

The big question of geopolitics will be not who has the larger population — but whether China or the west have made the right call on mass migration.